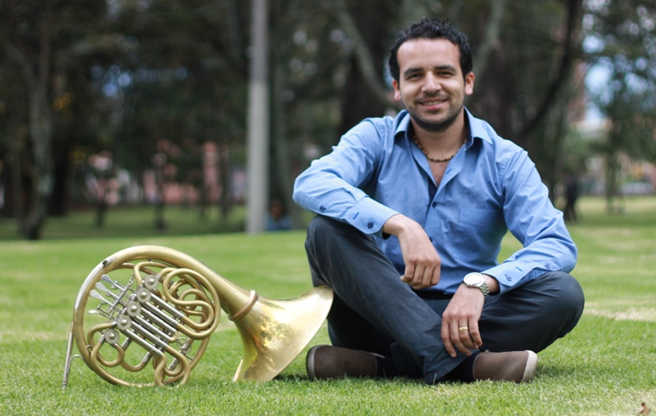 Daniel López (Chepe) was born in 1983 in Paipa, Colombia. He finished his Master’s degree with honors from the Hochschule für Musik Karlsruhe mit  professor Will Sanders, an Undergraduate Degree at Maastricht Conservatory in Holland after studying at the Mozarteum in Caracas and the Nation University of Colombia. winner of the silver medal at the SVIREL competition in Slovenia and the first place winner at the Freundeskreis competition in Karlsruhe.

In 2012 he won the position of principal of Horns in the Baden-Baden Philharmonic Orchestra. He made part of some orchestras like The Holland Youth Orchestra, Venezuelan National Philharmonic, Colombian National Symphony, the Mahler Chamber Orchestra, and recently as principal of the Santa Cecilia Orchestra of Madrid. Chepe has been invited to give workshops, perform as soloist and be on juries in different European and South American countries. As manager he has produced and directed youth musicals in Belgium and the Netherlands. He was director of the Usaquén Orchestral Center of the Bogotá Philharmonic, he is founder and director of the CORNOMBIA International Horn Festival and currently performs as guest hornist for the Royal Liege Philharmonic, Walonian Opera, Antwerp Symphony and the Netherlands National Philharmonic.